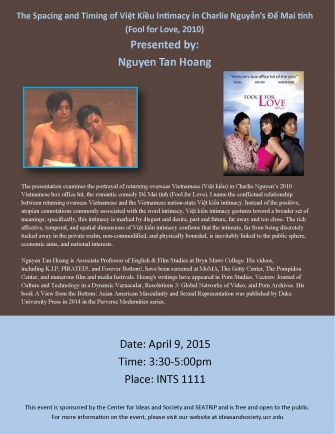 The presentation examines the portrayal of returning overseas Vietnamese (Việt kiều) in Charlie Nguyen’s 2010 Vietnamese box office hit, the romantic comedy Để Mai tính (Fool for Love). I name the conflictual relationship between returning overseas Vietnamese and the Vietnamese nation-state Việt kiều intimacy. Instead of the positive, utopian connotations commonly associated with the word intimacy, Việt kiều intimacy gestures toward a broader set of meanings; specifically, this intimacy is marked by disgust and desire, past and future, far away and too close. The rich affective, temporal, and spatial dimensions of Việt kiều intimacy confirms that the intimate, far from being discretely tucked away in the private realm, non-commodified, and physically bounded, is inevitably linked to the public sphere, economic aims, and national interests.