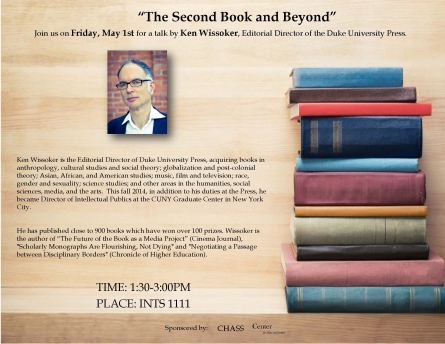 Ken Wissoker: The Second Book and Beyond

“The Second Book and Beyond”
Join us on Friday, May 1st for a talk by Ken Wissoker, Editorial Director of the Duke University Press.

Ken Wissoker is the Editorial Director of Duke University Press, acquiring books in anthropology, cultural studies and social theory; globalization and post-colonial theory; Asian, African, and American studies; music, film and television; race, gender and sexuality; science studies; and other areas in the humanities, social sciences, media, and the arts. This fall 2014, in addition to his duties at the Press, he became Director of Intellectual Publics at the CUNY Graduate Center in New York City.
He has published close to 900 books which have won over 100 prizes. Wissoker is the author of “The Future of the Book as a Media Project” (Cinema Journal), “Scholarly Monographs Are Flourishing, Not Dying” and “Negotiating a Passage between Disciplinary Borders” (Chronicle of Higher Education).