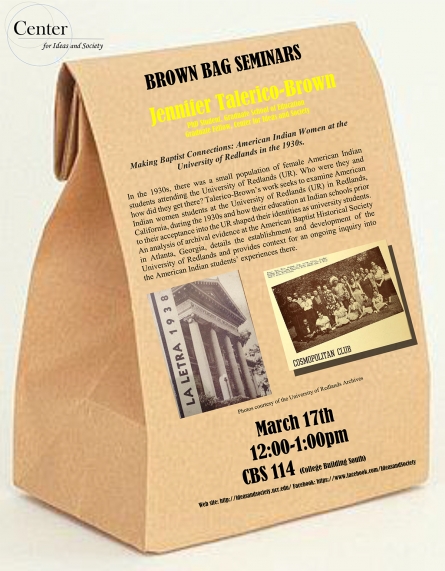 Making Baptist Connections: American Indian Women at the University of Redlands in the 1930s

Join us for a talk by Jennifer Talerico-Brown, Graduate School of Education PhD Student and Center for Ideas and Society Graduate Fellow. Learn more about the Brown Bag Seminars.

In the 1930s there was a small population of female American Indian students attending the University of Redlands (UR). Who were they and how did they get there? My work seeks to examine American Indian women students at the University of Redlands (UR) in Redlands, California during the 1930s and how their education at Indian schools prior to their acceptance into the UR shaped their identities as university students.[1]

The American Baptist Convention founded the University of Redlands in 1907. The first president, a minister of the First Baptist Church of Redlands, Jasper Newton Field declared, “while it is a Baptist institution … let it be a school where children of other denominations can come … without having their denominational preferences interfered with in the least.”[2] While the school promoted a nondenominational atmosphere, the ties to the Baptist community could be seen in its student body, in particular the American Indians who attended the university during the 1930s. Many of its American Indian students were transplants from another Baptist institution, Bacone College in Muskogee, Oklahoma, that acted as a conduit to the UR. During the 1930s, Bacone College was a two-year university that was designated for American Indian students only. Bacone encouraged its students seeking education at a four-year university to attend the UR with many of its students later returning to Bacone to become instructors or administrators.

The funding obtained through the Humanities Graduate Student Research Grants allowed me to complete archival research at the American Baptist Historical Society in Atlanta, Georgia in December of 2015. This site houses archival records for the American Baptist organization. As this organization was fully responsible for the management of Bacone College and provided some oversight and funding to the University of Redlands, I was privy to a large number of records that discussed school operations and funding issues for both schools. The primary documents provided insight into how the schools obtained and managed funding. They also provided contextual information as to the school’s objectives during the period of my examination.

[1]. For the purposes of this paper, the terms American Indians, Indians, Indigenous Americans, Native Americans, and Natives are used interchangeably throughout, the practice common among contemporary U.S. scholars. The terms woman and girl are used synonymously, not an indictor of age or status, but to indicate a person who identifies as or is identified by others as female.