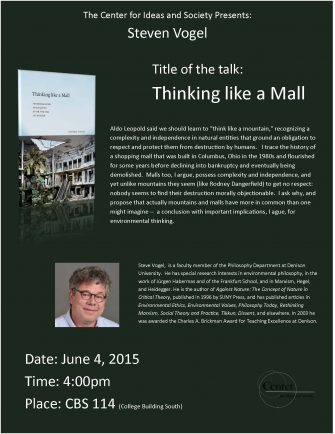 Aldo Leopold said we should learn to “think like a mountain,” recognizing a complexity and independence in natural entities that ground an obligation to respect and protect them from destruction by humans. I trace the history of a shopping mall that was built in Columbus, Ohio in the 1980s and flourished for some years before declining into bankruptcy and eventually being demolished. Malls too, I argue, possess complexity and independence, and yet unlike mountains they seem (like Rodney Dangerfield) to get no respect: nobody seems to find their destruction morally objectionable. I ask why, and propose that actually mountains and malls have more in common than one might imagine — a conclusion with important implications, I ague, for environmental thinking.

Steve Vogel, is a faculty member of the Philosophy Department at Denison University. He has special research interests in environmental philosophy, in the work of Jürgen Habermas and of the Frankfurt School, and in Marxism, Hegel, and Heidegger. He is the author of Against Nature: The Concept of Nature in Critical Theory, published in 1996 by SUNY Press, and has published articles in Environmental Ethics, Environmental Values, Philosophy Today, Rethinking Marxism, Social Theory and Practice, Tikkun, Dissent, and elsewhere. In 2003 he was awarded the Charles A. Brickman Award for Teaching Excellence at Denison.