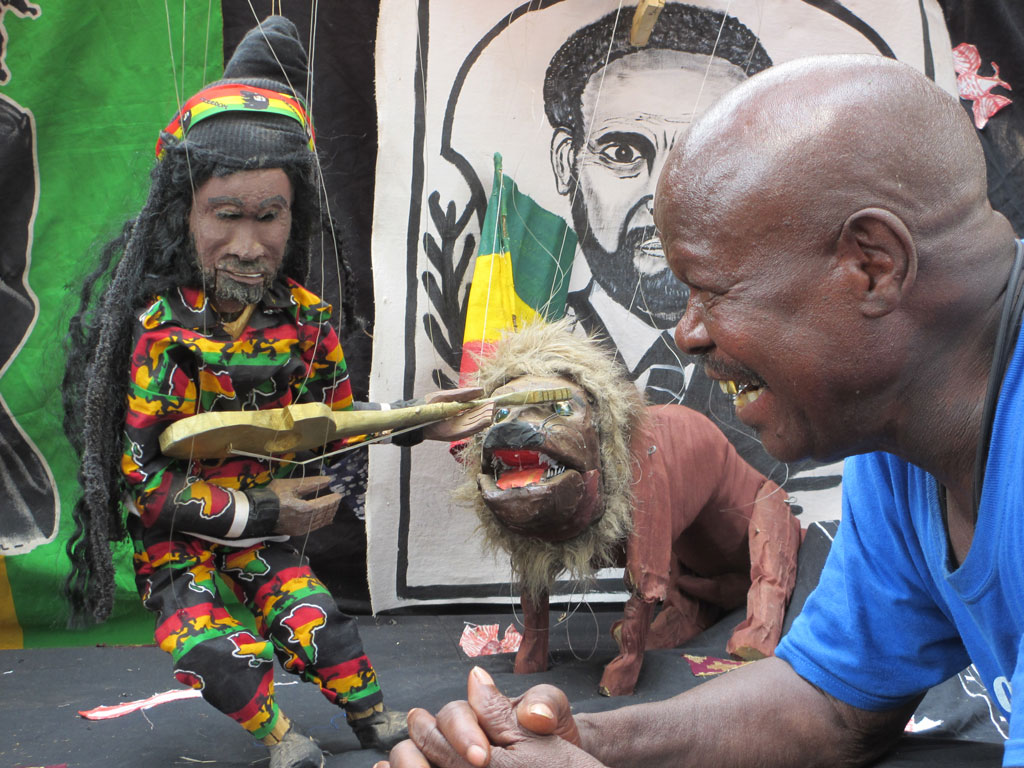 The conversation will focus on dialogic theory and method in linguistic, anthropological, and musical research. Examples where dialogism meets both the research demands and ethical issues of reflexivity and collaborative process will be presented and discussed across textual, audio, and film media.

J.C.ABBEY, GHANA’S PUPPETEER documents an exceptional fifty-year artistic career, from Accra’s streets to Ghana’s villages to international TV. In fifteen delightful puppet shows, Mr. Abbey is joined by musicians Nii Noi Nortey and Nii Otoo Annan and filmmakers Nii Yemo Nunu and Steven Feld to chronicle Ghana’s music since independence in 1957. The marionettes perform ethnic songs, dances and stories, but equally the sounds of highlife, Afro-jazz, Afro-rock, reggae, and contemporary hiplife. The innovative soundtrack includes historical documents from radio, TV and broadcast, and LP, as well as new compositions commissioned and performed to playback. This fifth feature in the Jazz Cosmopolitanism in Accra series mixes styles of historical documentary and contemporary music video. Through the pleasures of performance it reveals the cosmopolitan politics that intertwine ethnic, traditional, national, and global musical styles in Ghana today.

Steven Feld is an anthropologist, filmmaker, sound artist/performer, and Distinguished Professor of Anthropology Emeritus at the University of New Mexico. After studies in music, film, and photography, he received the Ph.D in Anthropological Linguistics at Indiana University in 1979. From 1976 he began a research project in the Bosavi rainforest of Papua New Guinea. Results include the monograph Sound and Sentiment (republished 2012 in a 3rd and 30th anniversary edition), a Bosavi-English-Tok Pisin Dicitionary, and essays, some published in his co-edited books Music Grooves and Senses of Place. From this work he also produced audio projects including Voices of the Rainforest. Key theoretical themes developed in this work are the anthropology of sound and voice; acoustemology, particularly regarding eco-cosmology as relational ontology; emotive sensuality; and experimental, dialogic writing, recording, and filmmaking. Work after 2000 has concentrated on related themes in the study of bells in Europe, Japan, Ghana, and Togo, published in CDs, DVDs, and books like The Time of Bells, Skyros Carnival, and Santi, Animali, e Suoni. His most recent project concerns jazz in West Africa, published in the twelve CD, five DVD, and book set Jazz Cosmopolitanism in Accra. Feld’s work has been supported and honored by MacArthur and Guggenheim fellowships as well as book and film prizes. All events are free and open to the public. For a complimentary parking permit, RSVP with your name and event title to cisevents@ucr.edu.
*Not available for current UCR students, faculty, and staff