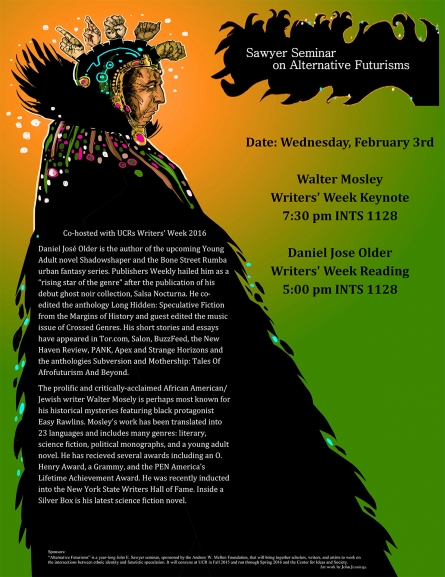 Daniel Jose Older is the author of the upcoming Young Adult novel Shadowshaper and the Bone Street Rumba urban fantasy series. Publishers Weekly hailed him as a “rising star of the genre” after the publication of his debut ghost noir collection, Salsa Nocturna. He co-edited the anthology Long Hidden: Speculative Fiction from the Margins of History and guest edited the music issue of Crossed Genres. His short stories and essays have appeared in Tor.com, Salon, BuzzFeed, the New Haven Review, PANK, Apex and Strange Horizons and the anthologies Subversion and Mothership: Tales Of Afrofuturism And Beyond.

The prolific and critically-acclaimed African American/Jewish writer Walter Mosely is perhaps most known for his historical mysteries featuring black protagonist Easy Rawlins. Mosley’s work has been translated into 23 languages and includes many genres: literary, science fiction, political monographs, and a young adult novel. He has recieved several awards including an O. Henry Award, a Grammy, and the PEN America’s Lifetime Achievement Award. He was recently inducted into the New York State Writers Hall of Fame. Inside a Silver Box is his latest science fiction novel.