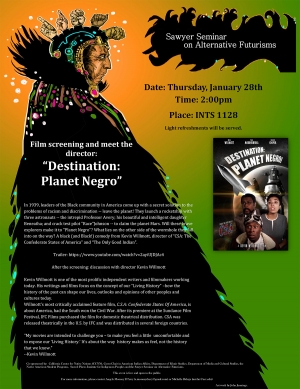 Join us for a film screening of “Destination:Planet Negro” followed by a discussion with the director, Kevin Willmott.

In 1939, leaders of the Black community in America come up with a secret solution to the problems of racism and discrimination — leave the planet! They launch a rocketship with three astronauts — the intrepid Professor Avery; his beautiful and intelligent daughter Beneatha; and crack test pilot “Race”Johnson — to claim the planet Mars. Will these brave explorers make it to “Planet Negro”? What lies on the other side of the wormhole they fall into on the way? A black (and Black!) comedy from Kevin Willmott, director of “CSA: The Confederate States of America” and “The Only Good Indian”.

Kevin Willmott is one of the most prolific independent writers and filmmakers working today. His writings and films focus on the concept of our “Living History” –how the history of the past can shape our lives, outlooks and opinions of other peoples and cultures today. Willmott’s most critically acclaimed feature film, C.S.A: Confederate States Of America, is about America, had the South won the Civil War. After its premiere at the Sundance Film Festival, IFC Films purchased the film for domestic theatrical distribution. CSA was released theatrically in the U.S. by IFC and was distributed in several foreign countries.

“My movies are intended to challenge you – to make you feel a little uncomfortable and to expose our ‘Living History.’ It’s about the way history makes us feel, not the history that we know.”
–Kevin Willmott

This event is free and open to the public.
Light refreshments will be served.
For more information, please contact Angela Mooney D’Arcy (a.mooneydarcy@gmail.com) or Michelle Raheja (michrr@ucr.edu)