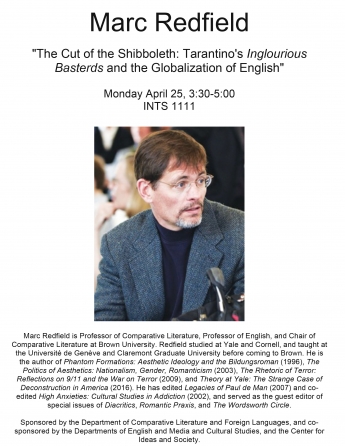 “The Cut of the Shibboleth: Tarantino’s Inglourious Basterds and the Globalization of English

Marc Redfield
The Cut of the Shibboleth: Tarantino’s Inglourious Basterds and the Globalization of English

Marc Redfield is Professor of Comparative Literature, Professor of English, and Chair of Comparative Literature at Brown University. Redfield studied at Yale and Cornell, and taught at the Université de Genève and Claremont Graduate University before coming to Brown. He is the author of Phantom Formations: Aesthetic Ideology and the Bildungsroman (1996), The Politics of Aesthetics: Nationalism, Gender, Romanticism (2003), The Rhetoric of Terror: Reflections on 9/11 and the War on Terror (2009), and Theory at Yale: The Strange Case of Deconstruction in America (2016). He has edited Legacies of Paul de Man (2007) and coedited High Anxieties: Cultural Studies in Addiction (2002), and served as the guest editor of special issues of Diacritics, Romantic Praxis, and The Wordsworth Circle. Sponsored by the Department of Comparative Literature and Foreign Languages, and cosponsored by the Departments of English and Media and Cultural Studies, and the Center for Ideas and Society.