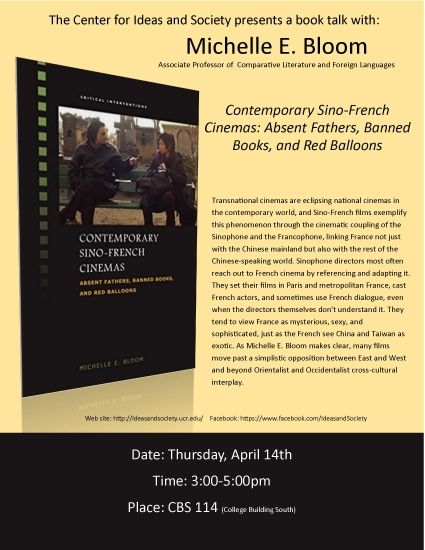 The Center for Ideas & Society presents a book talk with Michelle E. Bloom, Associate Professor of  Comparative Literature and Foreign Languages. Transnational cinemas are eclipsing national cinemas in the contemporary world, and Sino-French films exemplify this phenomenon through the cinematic coupling of the Sinophone and the Francophone, linking France not just with the Chinese mainland but also with the rest of the Chinese-speaking world. Sinophone directors most often reach out to French cinema by referencing and adapting it. They set their films in Paris and metropolitan France, cast French actors, and sometimes use French dialogue, even when the directors themselves don’t understand it. They tend to view France as mysterious, sexy, and sophisticated, just as the French see China and Taiwan as exotic. As Michelle E. Bloom makes clear, many films move past a simplistic opposition between East and West and beyond Orientalist and Occidentalist cross-cultural interplay.

A part of the Hot off the Presses Series