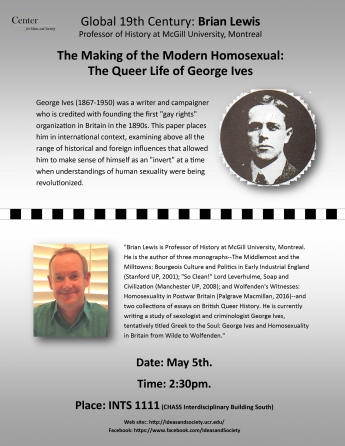 The Making of the Modern Homosexual: The Queer Life of George Ives
Brian Lewis, Professor of History at McGill University, Montreal

George Ives (1867-1950) was a writer and campaigner who is credited with founding the first “gay rights” organization in Britain in the 1890s. This paper places him in international context, examining above all the range of historical and foreign influences that allowed him to make sense of himself as an “invert” at a time when understandings of human sexuality were being revolutionized.

“Brian Lewis is Professor of History at McGill University, Montreal. He is the author of three monographs–The Middlemost and the Milltowns: Bourgeois Culture and Politics in Early Industrial England (Stanford UP, 2001); “So Clean!” Lord Leverhulme, Soap and Civilization (Manchester UP, 2008); and Wolfenden’s Witnesses: Homosexuality in Postwar Britain (Palgrave Macmillan, 2016)–and two collections of essays on British Queer History. He is currently writing a study of sexologist and criminologist George Ives, tentatively titled Greek to the Soul: George Ives and Homosexuality in Britain from Wilde to Wolfenden.”