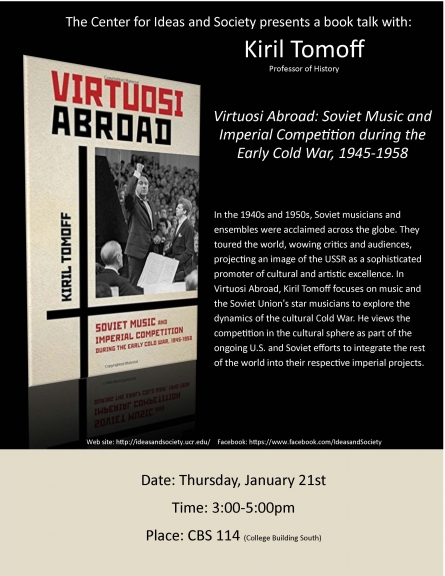 Hot off the Presses: Kiril Tomoff

The Center for Ideas & Soceity presents a book talk with Kiril Tomoff, Professor of History. In the 1940s and 1950s, Soviet musicians and ensembles were acclaimed across the globe. They toured the world, wowing critics and audiences, projecting an image of the USSR as a sophisticated promoter of cultural and artistic excellence. In Virtuosi Abroad, Kiril Tomoff focuses on music and the Soviet Union’s star musicians to explore the dynamics of the cultural Cold War. He views the competition in the cultural sphere as part of the ongoing U.S. and Soviet efforts to integrate the rest of the world into their respective imperial projects.

A part of the Hot off the Presses Series