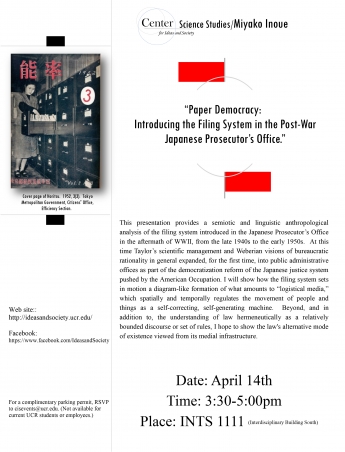 This presentation provides a semiotic and linguistic anthropological analysis of the filing system introduced in the Japanese Prosecutor’s Office in the aftermath of WWII, from the late 1940s to the early 1950s. At this time Taylor’s scientific management and Weberian visions of bureaucratic rationality in general expanded, for the first time, into public administrative offices as part of the democratization reform of the Japanese justice system pushed by the American Occupation. I will show how the filing system sets in motion a diagram-like formation of what amounts to “logistical media,” which spatially and temporally regulates the movement of people and things as a self-correcting, self-generating machine. Beyond, and in addition to, the understanding of law hermeneutically as a relatively bounded discourse or set of rules, I hope to show the law’s alternative mode of existence viewed from its medial infrastructure.

For a complimentary parking permit, please RSVP with your name and the event title to cisevents@ucr.edu.
On the day of the event: Go to a Parking Kiosk and give your name to receive a permit and directions to the appropriate parking lot. Kiosks are located at the corners of Martin Luther King Blvd. & Canyon Crest or at University Ave & West Campus Drive. For a Campus Map Go to:  https://campusmap.ucr.edu/map.pdf

*Not available for current UCR students, faculty, and staff.