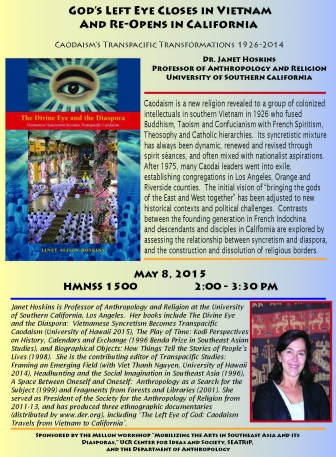 God’s Left Eye Closes in Vietnam
And Re-Opens in California:

Caodaism is a new religion revealed to a group of colonized intellectuals in southern Vietnam in 1926 who fused Buddhism, Taoism and Confucianism with French Spiritism, Theosophy and Catholic hierarchies. Its syncretistic mixture has always been dynamic, renewed and revised through spirit séances, and often mixed with nationalist aspirations. After 1975, many Caodai leaders went into exile, establishing congregations in Los Angeles, Orange and Riverside counties. The initial vision of “bringing the gods of the East and West together” has been adjusted to new historical contexts and political challenges. Contrasts between the founding generation in French Indochina and descendants and disciples in California are explored by assessing the relationship between syncretism and diaspora, and the construction and dissolution of religious borders.

Janet Hoskins is Professor of Anthropology and Religion at the University of Southern California, Los Angeles. Her books include The Divine Eye and the Diaspora: Vietnamese Syncretism Becomes Transpacific Caodaism (University of Hawaii 2015), The Play of Time: Kodi Perspectives on History, Calendars and Exchange (1996 Benda Prize in Southeast Asian Studies), and Biographical Objects: How Things Tell the Stories of People’s Lives (1998). She is the contributing editor of Transpacific Studies: Framing an Emerging Field (with Viet Thanh Nguyen, University of Hawaii 2014), Headhunting and the Social Imagination in Southeast Asia (1996), A Space Between Oneself and Oneself: Anthropology as a Search for the Subject (1999) and Fragments from Forests and Libraries (2001). She served as President of the Society for the Anthropology of Religion from 2011-13, and has produced three ethnographic documentaries (distributed by www.der.org), including “The Left Eye of God: Caodaism Travels from Vietnam to California”.

Sponsored by the Mellon workshop “Mobilizing the Arts in Southeast Asia and its Diasporas,” UCR Center for Ideas and Society, SEATRiP, and the Department of Anthropology