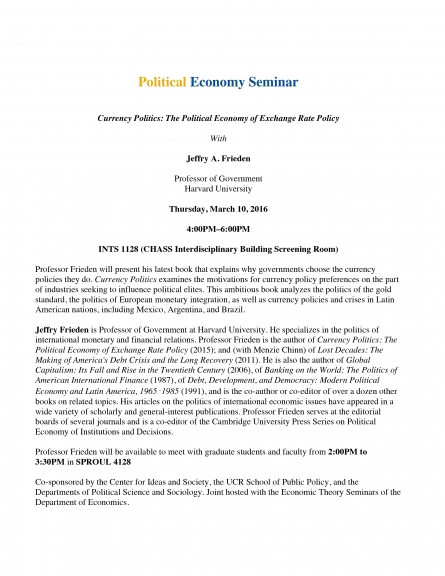 Professor Frieden will present his latest book that explains why governments choose the currency policies they do. Currency Politics examines the motivations for currency policy preferences on the part of industries seeking to influence political elites. This ambitious book analyzes the politics of the gold standard, the politics of European monetary integration, as well as currency policies and crises in Latin American nations, including Mexico, Argentina, and Brazil.

Jeffry Frieden is Professor of Government at Harvard University. He specializes in the politics of international monetary and financial relations. Professor Frieden is the author of Currency Politics: The Political Economy of Exchange Rate Policy (2015); and (with Menzie Chinn) of Lost Decades: The Making of America’s Debt Crisis and the Long Recovery (2011). He is also the author of Global Capitalism: Its Fall and Rise in the Twentieth Century (2006), of Banking on the World: The Politics of American International Finance (1987), of Debt, Development, and Democracy: Modern Political Economy and Latin America, 1965‑1985 (1991), and is the co-author or co-editor of over a dozen other books on related topics. His articles on the politics of international economic issues have appeared in a wide variety of scholarly and general-interest publications. Professor Frieden serves at the editorial boards of several journals and is a co-editor of the Cambridge University Press Series on Political Economy of Institutions and Decisions.

Professor Frieden will be available to meet with graduate students and faculty from 2:00PM to 3:30PM in SPROUL 4128.

Co-sponsored by the Center for Ideas and Society, the UCR School of Public Policy, and the Departments of Political Science and Sociology. Joint hosted with the Economic Theory Seminars of the Department of Economics.

For a complimentary parking permit, please RSVP with your name and the event title to cisevents@ucr.edu.

To pick up your permit on the day of the event: At the Parking Kiosk request parking for “Jeffry Frieden” to receive a permit and directions to the appropriate parking lot. Kiosks are located at the corners of Martin Luther King Blvd. & Canyon Crest or at University Ave & West Campus Drive. For a Campus Map Go to:  https://campusmap.ucr.edu/map.pdf

*Not available for current UCR students, faculty, and staff.