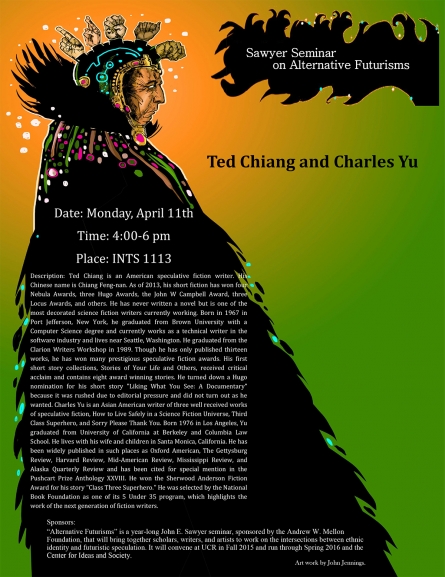 Ted Chiang is an American speculative fiction writer. His Chinese name is Chiang Feng-nan. As of 2013, his short fiction has won four Nebula Awards, three Hugo Awards, the John W Campbell Award, three Locus Awards, and others. He has never written a novel but is one of the most decorated science fiction writers currently working. Born in 1967 in Port Jefferson, New York, he graduated from Brown University with a Computer Science degree and currently works as a technical writer in the software industry and lives near Seattle, Washington. He graduated from the Clarion Writers Workshop in 1989. Though he has only published thirteen works, he has won many prestigious speculative fiction awards. His first short story collections, Stories of Your Life and Others, received critical acclaim and contains eight award winning stories. He turned down a Hugo nomination for his short story “Liking What You See: A Documentary” because it was rushed due to editorial pressure and did not turn out as he wanted.

Charles Yu is an Asian American writer of three well received works of speculative fiction, How to Live Safely in a Science Fiction Universe, Third Class Superhero, and Sorry Please Thank You. Born 1976 in Los Angeles, Yu graduated from University of California at Berkeley and Columbia Law School. He lives with his wife and children in Santa Monica, California. He has been widely published in such places as Oxford American, The Gettysburg Review, Harvard Review, Mid-American Review, Mississippi Review, and Alaska Quarterly Review and has been cited for special mention in the Pushcart Prize Anthology XXVIII. He won the Sherwood Anderson Fiction Award for his story “Class Three Superhero.” He was selected by the National Book Foundation as one of its 5 Under 35 program, which highlights the work of the next generation of fiction writers.