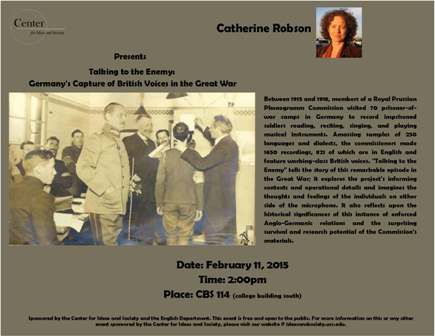 Talking to the Enemy: Germany’s Capture of British Voices in the Great War

Talking to the Enemy: Germany’s Capture of British Voices in the Great War
Catherine Robson

Between 1915 and 1918, members of a Royal Prussian Phonogramm Commission visited 70 prisoner-of-war camps in Germany to record imprisoned soldiers reading, reciting, singing, and playing musical instruments. Amassing samples of 250 languages and dialects, the commissioners made 1650 recordings, 821 of which are in English and feature working-class British voices. “Talking to the Enemy” tells the story of this remarkable episode in the Great War; it explores the project’s informing contexts and operational details and imagines the thoughts and feelings of the individuals on either side of the microphone. It also reflects upon the historical significances of this instance of enforced Anglo-Germanic relations and the surprising survival and research potential of the Commission’s materials.

Sponsored by the Center for Ideas and Society, the English Department, Art History and the History Department. This event is free and open to the public.