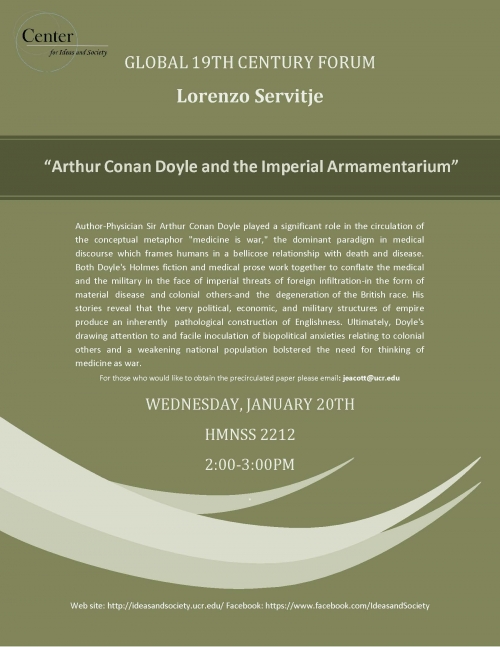 Author-Physician Sir Arthur Conan Doyle played a significant role in the circulation of the conceptual metaphor “medicine is war,” the dominant paradigm in medical discourse which frames humans in a bellicose relationship with death and disease. Both Doyle’s Holmes fiction and medical prose work together to conflate the medical and the military in the face of imperial threats of foreign infiltration-in the form of material disease and colonial others-and the degeneration of the British race. While the martial metaphor works as an invisible structuring logic to a number of the Holmes stories prior to the fin de siècle, after Doyle’s embodiment of the martial metaphor in the capacity of a military surgeon during the Boer War, he deploys the metaphor explicitly as central plot devices in two of his more overtly medical tales in the early twentieth century. Reading this changing relationship between Doyle and the marital metaphor within the context of British military and medical history, reveals that Doyle produced contradictory implications with respect to the nation’s biological and social health: on the one hand, he posits Holmes and Watson as an imperial “immune system,”; on the other, his stories reveal that the very political, economic, and military structures of empire produce an inherently pathological construction of Englishness. Ultimately, Doyle’s drawing attention to and facile inoculation of biopolitical anxieties relating to colonial others and a weakening national population bolstered the need for thinking of medicine as war.

For those who would like to obtain the precirculated paper please email jeacott@ucr.edu.